Miguel Díaz-Canel, first vice president of Cuba’s Councils of State and Ministers gave a speech during the ceremony marking the 50th anniversary of the death of Che and his compañero. He said: 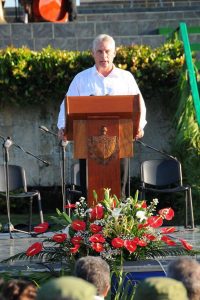 “Political interests in the sister Republic of Venezuela are attempting to prevent Venezuelans from freely exercising their right to self-determination, with the United States applying unjust sanctions. However, faithful to our internationalist vocation, we once again reaffirm Cuba’s support for the Bolivarian and Chavista people and the government led by Nicolás Maduro.”

At the Toronto book launch of CUBA–U.S. RELATIONS, Arnold August will deal (among others) with this issue of Venezuela in the context of the analysis in his book: The Obama Cuba policy is part of the new American offensive to regain control over Latin America, including both Venezuela and Cuba, using the “carrot” for Cuba (now with the Trump trademark) and “stick” (Venezuela) policy. However, this does not work as Miguel Díaz-Canel just confirmed.

We are honoured with the presence of the Consul General of the Bolivarian Republic of Venezuela in Toronto, Luis Acuña Cedeño, who will have a message of greetings and be available in the question and answer period.