TrumpCubaPolicy: What Will Happen in Coming Months?

“TrumpCubaPolicy cannot take effect until the new regulations are established, a process that, according to the White House Fact Sheet, ‘may take several months.’”

The official June 16 statement was barely uttered when the majority nationwide opposition to the TrumpCubaPolicy was once again reignited. Indeed, it was already extremely active and vocal before the Little Havana, Miami venue and date were announced on June 9. By stage-managing the event in Little Havana, Trump was preaching to the choir, one that does not even include the rest of Florida, where the majority of Cuban-Americans oppose the blockade, or at least the Obama policy of making the blockade somewhat more flexible. Trump’s  trademark manner of hand-picking events to spread the word across the country will not work. His Cold War rhetoric will not detract the forces that want to increase trade and travel to Cuba.

However, Trump’s policy is not yet set in stone. According to the June 16 White House Fact Sheet on Cuba Policy, the Treasury and Commerce Departments will begin the process of issuing new regulations only in 30 days. His policies cannot take effect until the new regulations are established, a process that, according to the Fact Sheet, “may take several months.” A lot can happen within this time frame.

My book available at Amazon 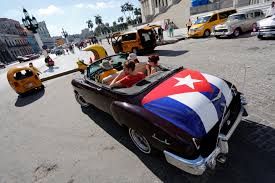